A love of stones 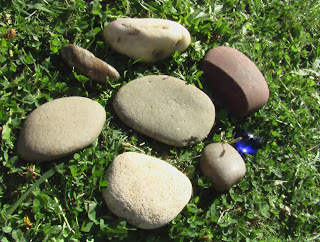 C'est fini.  I think I have finished my piece - more or less - pending further refinements and editing - unless I change my mind again.  This piece has been driving me round the bend for a while now.  Things would go swimmingly and then I would lose the thread and the vision would start to unravel.  It started off being about one thing and now it is about something else, but also still about the first thing, kind of.  I wanted the piece to be about moments but the moments became bloated and over-written.  And then they were pruned into something different again, and again.
There was one notable evening when I very nearly gave up on the whole project - 'I can't write music, I've forgotten how, I am pathetic and talentless and clearly deluded' - that kind of thing.  I vented at my partner, the air was blue, then after a cup of milo and some calming words several helpful realisation were reached.  (i) There is no point giving up now because it [writing music] will only get harder if you don't keep doing it.  (ii) It wont seem so bad in the morning.  How true.
I knew I wanted the piece to be in small sections, with the spaces between (notice a recurring theme?) being significant.  I also wanted the piece to be about a process of de-cluttering and simplifying, each smaller section reflecting stages in the process.  The image of a path of stepping stones came to mind - each stone with a shape and character of its own but part of a larger function.  I scribbled in my note book
"... idea that transformation, change, growth, happens in the spaces between... kids grow in their sleep; the mind/subconscious at work when we sleep.  The spaces are significant because this is where thought / reflection / awareness happens and this enables growth..."
And again I am drawn to the Japanese concept of 'Ma', particularly as it is reflected in Japanese stone gardens, such as Ryoanji in Kyoto , where the placement of stones is carefully judged, with equal attention to the spaces between the stones as well as the qualities of the stones themselves.  I love this idea.  So I think the piece is about the careful placing of musical moments in stillness and time.  Which is what I wanted it to be all along.

There has been a lot of frustration in the air recently, most graphically brought into focus by the appalling tantrums of our two year old.  These are becoming a daily occurrence.  Her expression of pure rage and frustration is something to behold, and beholding it is about all one can do.  Like any force of nature, they just have to run their course.  Watching these tantrums is like seeing an intensified and physicalised manifestation of what I’ve been feeling for the last month or so.  At least I have the words (occasionally) to articulate what I’m feeling and can see lack of progress within a larger context.  My darling daughter is instead buffeted by waves of utter frustration that have no way of dissipating other than through crazy tsunamis of rage.

That I am actually sitting and writing something is a step forward and is largely due to the fact that we have had something approximating an Easter holiday – ie we went somewhere else (my mother’s house) and did things together as a family (some time at the beach) and mind numbing domestic tasks were minimalised.  And although it was only four days it was a much-needed circuit breaker.  So the work (music) is progressing slowly, so I have failed to meet my self-set (and completely arbitrary) deadline, so my teaching load is messily and inefficiently spread over days when I could be doing my own work at home… oh well.  It is not ideal (things rarely are) and I feel a bit frustrated (less than I did a couple of weeks ago) but my life has many facets and they don’t necessarily fit together neatly.  I haven’t got the ‘child-rearing / paid work / MY work /  miscellaneous-personal-stuff’ balance right yet and it will probably never be perfect but then things rarely are.   Yet again, I have to be reminded by my nearest and dearest that maybe my expectations need to be reviewed.  OK.  I’ll adjust (and re-adjust) my sights accordingly and remember that the only one that has these expectations of me is ME and not some imaginary panel of peer assessors ready to mark me down if I don’t come up with the goods in time.
Posted by Christine McCombe at 5:45 PM 3 comments: