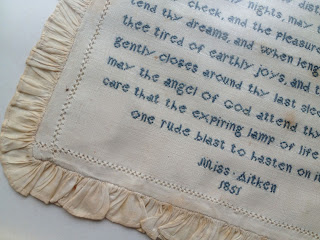 Across media, these forms share certain characteristics.  Brevity.  Succinctness. Focus.  A willingness to experiment.  An intensity of utterance.
I feel drawn to these small forms.  I would often rather listen to a short chamber work than a large orchestral piece.  Contemplating a small, beautifully crafted object can be more satisfying than trying to take in a huge expanse of art.  A short poem can capture an essential truth that may get lost in an epic novel.

The reasons why artists work in small forms are probably as varied as the works themselves.  Perhaps it is a necessity of time or space.  Perhaps it is a preference for minutiae over expanse.  Maybe it is the singular focus required when working on something small.

I have at times chosen to work in small forms because my time was fragmented and sustaining a large-scale work seemed beyond me.  But more often it is the essential nature of small forms that appeals to me.  When your parameters are limited, you need to focus on what is important.  There is a particular challenge in working with constrained material as well – discovering the potential of limited means.   At the moment I am working on a series of video ‘miniatures’ - short works of sound and image that are no more than 3 and a half minutes long.  I am really enjoying the immediacy of working in this way – I can create a new work in a couple of days as opposed to a couple of weeks or months.  And the immediacy for me is also in the fact that I can hear and see the finished works as soon as they are complete – I don’t need to wait months or years to hear the works realised by performers.  Each small work poses new technical challenges and they are very much learning pieces for me, not having worked in this way before – composing the sound and image together.

There is a long history of making small-scale studies or maquettes or etudes or samplers or miniatures, often as a preliminary or preparatory work for a more extended piece. The embroidered ‘Sampler’ is kind of test piece or demonstration or embroidery skill, a ‘small form’ that many girls and young women were expected to master in the 18th and 19th centuries, and earlier.  We have an example of incredibly fine Victorian embroidery in the form of a small, embroidered pillowcase, made by a Miss Aitken in 1851.  I am amazed at the tiny neat stitches that make my eyes ache – a rather lovely miniature demonstrating technical skill – as well as an edifying religious message!
As a student of piano, I also remember playing many studies or etudes which were intended to develop certain technical skills but which were also often beautiful pieces in their own right.

I like this idea or experimenting, trying things out, learning new techniques, refining ideas – with the possibility of using what is discovered in a later and possibly larger work.   But also allowing that the ‘miniatures’ or sketches have aesthetic value in them selves - whether or not they are stepping stones does not detract from their intrinsic worth or appeal.

And small forms offer the listener / reader / viewer a glimpse of something, another world. They don’t have to stay long but the experience can be as intense and the memory as long lasting.
Posted by Christine McCombe at 5:04 PM No comments: