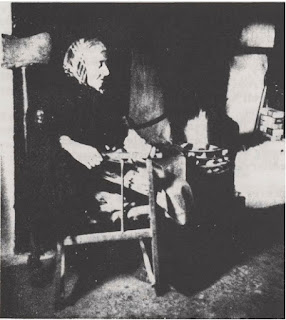 In the 1950s an American ethnomusicologist, Sidney Robertson Cowell, traveled to Ireland to record some of the traditional Gaelic music of the West of Ireland.  (Sidney Cowell was married to pioneering American composer Henry Cowell.)  She recorded various types of traditional songs preserved in the isolation of the isles of Aran – lullabies, weaving songs and folk songs.  She also recorded several examples of the Caoine or Caoineadh (keen) – the traditional mourning song practiced in Gaelic speaking Ireland and Scotland.

The Caoineadh is distinct from the more poetic and personalized form of mourning song, the Lament.  A Caoineadh is a ritualized wailing, the melodic contour generally starting high and descending in pitch, the words usually a repeated phrase such as ‘Och, Ochone’ (Woe, Woe) or similar, often more spoken than sung.  In the notes that accompany Cowell’s recordings she describes the Caoineadh as “a ritual (and tearless) crying-out against grief and death in the world, and it goes back into time as far as anything we know.” (Cowell, 1957)  The people of this part of Ireland were no strangers to grief, the great famine of the 1840s having decimated their population.  According to Cowell, half the population of the western isles starved to death and half of the surviving islanders migrated.

One of the singers recorded by Cowell in the 1950s was a woman called Bridget Mullin who was born in 1868 and was described as “the leading professional keening woman of the islands.” (Cowell, 1957).  The Caoineadh was traditionally sung by family members at the time of the loved one’s death but later, as the body left the house for the last time, professional wailing women took up the Caoineadh.  There is another recorded example of a Caoineadh, sung by a woman who didn’t want her name to be known in case her relatives heard that she had agreed to perform this very powerful song at random.  Cowell describes how the woman, on agreeing to sing for her, “went around the house to peer up and down the road, and then she barred the door against unexpected callers, before sitting down at the hearth.” (ibid)  When Sidney Cowell played these recordings to a gathering in New York, several people were overcome by the intense and intimate quality of the recordings and Cowell herself questioned whether in fact these songs were too private to be released as a commercial recording.  She was eventually convinced of the need for these songs to be heard, as a document and a relic of a fading cultural practice.  This was over 50 years ago and I wonder is these songs are still sung at all.

The power of these women’s voices is compelling.  You can hear the remembered emotion summoned by the singing of these songs: the remembered mourning of dead parents, husbands and children.  These recordings are remarkable in that they capture a vocal tradition that, even at the time of recording, was dying out.  And more remarkable, I can hear these women’s voices today, long after their voices have stopped, thousands of miles away.  It also makes me wonder if at some time in my family’s past, my own great great grandmothers may have sung these songs at the time of someone’s passing.

I wish this tradition was alive still, that today we had such clear rituals to follow that allowed us to really voice our grief.  In many cultures wailing is still part of grieving but in our polite modern Australian society there is little room for this kind of behavior.  What a relief to wail out all the sadness, albeit in a controlled ritualized way, but one filled with emotion and outward expression of inner grief.  How empowering it would be to put that into song, to follow the traditional form as a guide but to infuse it with your own personal grief and emotion.  I think I may be past the point where wailing will help express my grief but I am very drawn to this ancient musical form.

Liner notes by Sidney Robertson Cowell and the recordings are available through the Smithsonian Folkways website.

Written in the past tense 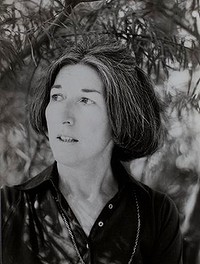 I found this article by Gay Alcorn  in The Age this morning.  I don't think I had heard of Elizabeth Harrower  or The Watch Tower (1966) but I am so glad this book has been re-published by Text Publishing and I will make a point of reading it.  I remember being surprised that Sumner Locke Elliot's beautiful book Careful, He Might Hear You (1963) was out of print and was so glad that Text Publishing planned to re-publish it.  I can remember reading and re-reading Careful, He Might Hear You as a teenager and being completely entranced by it.  These books are from another time but part of their appeal for me is that they capture something of our culture that is only just passed - something within the lifetime of my parents' generation, that is fading from our collective memory.  And how wonderful that these books are coming back into publication and that for Elizabeth Harrower at least, there will be a new wave of recognition for the author while she is still with us.

Posted by Christine McCombe at 10:28 AM No comments: