An alternative reading of Anzac day

“This was our first act of nationhood in the eyes of a watching world” – Julia Gillard, Anzac Day Address, 2012

Was Anzac Day, as Julia Gillard put it, “our first act of nationhood” or a catastrophe for a young nation, one that would take us decades to recover from?

I was very interested to see Tony Jones’ interview with Australian Historian Ross McMullin on ABC’s Lateline on Anzac Day.  McMullin’s book Farewell, Dear People: Biographies Of Australia’s Lost Generation (Scribe, 2012) tells the stories of some of those who didn’t come back from WW1 and reflects on the outstanding potential that was lost to Australia and the world.  I haven’t yet read the book, but I will.  In his interview on Lateline it really seemed that a different reading of Anzac day was being proposed – perhaps a less idealistic and romanticized one than the version we are regularly fed by the media and our politicians.

The 25th of April, 1915 wasn’t the day that forged our national identity – it was a day when Australia’s potential was diminished, followed by many other days when even more of our youngest and brightest were killed, their potential ended and the potential of Australia as a young nation went with them.

If all those thousands of young men had not been slaughtered, if they had been allowed to live out their lives and reach their potential, can you imagine the society that they would have contributed to?  What would our society, our national identity, be like today?  In many ways Australia punches above its weight in various arenas, despite the decimation of our population in the early 20th century.  Imagine what we might have achieved had these men grown to old age.  Would we have the chip on our shoulder, the tall poppy syndrome and the various other characteristics we have come to equate with our national identity?

I hope that by the time we get to the centenary of Anzac day that we as a nation might start to re-think this national trope of Australian Character forged on the battlefields of WW1, a sign of our warrior nationhood.  After 100 years, and still sending our youngest and brightest to war, maybe we can rethink how a war nearly 100 years ago shaped us as a Nation.  Perhaps we accept the reality that rather than strengthening and galvanizing us as a nation, that it actually damaged us as a country, crippled and brutalized and traumatised thousands and thousands of people, in addition to those that died, stripped us of much of the potential of the young century and set us back decades in terms of what we might, as a nation, have achieved.

The significance of our ‘National’ days has never sat well with me.  Australia day – the start of an ongoing disaster for Australia’s first people.  Anzac Day – a commemoration of brutal and arguably pointless slaughter.  Yet we chose to mark these days as days of celebration and commemoration.  I say this as the daughter of an army man.  My father was a career soldier;  the army gave him many opportunities and the chance at an alternative life to that of a poor, under educated dairy farmer.  But my father never joined the RSL, never in my living memory went on an Anzac day march.  Although it was never said aloud, war was not something to celebrate or commemorate – but rather something to try and move on from.  Not to forget, but not to remember either.  War is a truly terrible thing.  My father was deeply scarred and traumatised by his experiences in battle.  Having to kill someone is not something that would be easy to live with.  I remember my mother telling me about my father’s nightmares – 20, 30 years after he returned from active service he was still re-living the horror in his dreams.

Nietzsche may have observed “That which does not kill us makes us stronger” but if it kills your sons and your brothers and your fathers and your uncles and decimates your community - only an incredibly over optimistic reading can make that in any way positive.   I am not proposing that we should all wallow in national self-pity for what might have been.  But perhaps on Anzac Day we can at least be honest and open about what we have lost.  And what we continue to lose every time some young, talented, loved son or daughter dies because of a war.

Posted by Christine McCombe at 6:38 PM No comments: 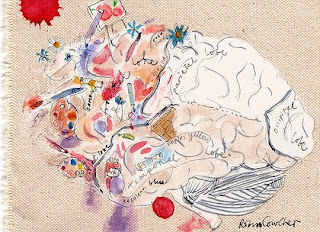 
Symptoms may include creativity
Jonah Lehrer
I found this article in The Age very interesting and also quite moving.  It reminded me how fleeting and precious creativity is - and life in general. And it also reminded me how important sleeping is... maybe that's why I feel that I have never had enough sleep?  Or maybe it's just because I HAVEN'T HAD ENOUGH SLEEP.

Posted by Christine McCombe at 3:45 PM No comments: