The Poetics of Silence

I teach a course at RMIT that focuses on sound and time and space.  This week we spent some time looking at the idea of SILENCE.  I have to say that Silence is one of my favourite subjects – so overlooked and underrated, particularly in music.  Each week I set a reading to discuss in seminar – this week it was Thomas Clifton’s ‘The Poetics of Musical Silence’, published in The Musical Quarterly in 1976.  Although the essay is very clearly focused on the roles of silence in traditional Western Art music, the ideas developed can easily be applied to any kind of music or sound art.  Clifton sets out to discuss different qualities and types of silence and the effects these have on the listener’s perception.  He opens by comparing the study of musical silence to “deliberately studying the spaces between trees in a forest”: from the outset this essay has so many connections with my own work and preoccupations.  And the subject area clearly found a lot of resonance with the students – most could directly relate Clifton’s analyses of musical silence to music that the listened to.  For anyone interested in the poetics of silence, this paper is well worth reading, but I’ll attempt to outline some of the ideas he presents.  Clifton’s work seems to give physical form to silence – he describes “hard-edged silence” where there is sharp contrast between sound and silence.  In other instances the boundary between sound and silence is almost imperceptible.  In his description of ‘Silences in Motion’ he outlines a kind of silence where sound “disappears below the threshold of audibility” but is still present, just out of hearing, until the sounds re-emerge above the hearing threshold once more.  He explores the idea of “Silences in Registral Space” – the idea that the sound space covers the whole range of audible frequencies, or register, and that sounds can drop out of a particular register, leaving a kind of sonic void that seems to wait to be filled.  One of the main points that Clifton makes is that one of the strongest effects of silence is to heighten our perception and awareness.  The introduction of silence makes us listen more intently, waiting for the return of sound.  The dramatic nature of this perceptual focus is clear in the use of silence to surprise – sudden silence, or to increase expectation – the tension of waiting for the next sound.  His essay also reflects on the nature of ‘ending’ – the quality of the final silence.  Silence can be approached by a gradual emptying out of the registral  space, a gradual disengaging from the composition: “the piece itself becomes absent”.  This type of prepared ending allows us to accept that the piece is indeed coming to an end and that the silence that will follow is final.   We had an interesting discussion about the impact of abrupt or unexpected endings in music – that these types of endings can be quite disturbing, unsettling and in some cases quite shocking.  I was reminded of a friend who always insisted on ‘fading out’ any music that was playing on the stereo before he left the room – he would NEVER just press ‘stop’, so extreme was his reaction to any unprepared ending.   The nature of ending is something that relates to so many aspects of our lives, and as is so often the case, music can act as a kind of sonic analog for things other than music.  Clifton takes this to its extreme when he draws a parallel between musical ending and Heidegger’s phenomenological description of death.  Clifton invites us to “consider the way music presents the essence of dying.”  A musical ending is in effect a disengaging with the possibility of further ‘relationships’.  The piece becomes ‘absent’.  “When silence intervenes… the piece itself passes over into nothingness.”  Such a powerful and beautiful way to think about the nature of ending, musical or otherwise.

Posted by Christine McCombe at 2:55 PM No comments:

Yesterday I spent a very pleasant couple of hours 'speed dating'.  Not the conventional meat-market-show-us-your-wares type of speed dating, but a much more refined and creatively rewarding version. Chamber Made Opera and the Victorian Writers' Centre have just run a week long Librettists Workshop, part of which was a lunchtime 'speed dating' session where writers could meet composers, discuss ideas (briefly) and make connections. I sat in a comfortable chair by the window and talked to writers about their work and told them a little bit about mine.  There was food, drink, interesting company and a clearly defined structure to make sure that writers got to talk to composers (and vice versa) for at least a couple of minutes. And in between the hard work there was time to chat to everyone else, other composers and performers and old friends.  I'm sure I will follow up a couple of the writers I met, as even in such a short space of time, various strands of common ground emerged.  Possibilities start to present themselves, seeds of ideas are planted and I am reminded that I am part of a community and not just a solitary composer sitting at my desk. 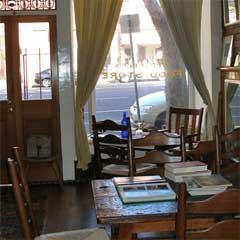