On Typing and Typewriters

I bought a typewriter.  I’ve been wanting to buy one for a while and I always keep a look out as I wander through op shops and second hand 'retro' markets.  I found a Brother Deluxe 760TR in working condition for a reasonable price.  Its carriage return was a bit stiff so I took it to be serviced by possibly the last typewriter service person in Melbourne – on Johnston Street Carlton, in a shop I have walked past hundreds of times over the last 30 years.  I brought it home, smelling of oil and working like new.  I put it on the dining table, found some scrap paper, and started typing*.  When I left my place for a moment, one of my children sat down and had a go – slowly at first and then picking up speed.  The quick brown fox jumped over the lazy dog several times.  Then my other daughter took a turn, bringing with her some poems to type out but quickly getting irritated at the challenges of this new way of typing.  Then I started writing nonsense Haiku as a way of practising but also an entertaining pastime as I read them out and then typed out new ones dictated by my younger daughter.  We laughed and shared our ridiculous efforts with the older child who had returned, recovered from her frustration and ready to try again.  I went out to do the grocery shopping and when I returned my older daughter showed me the pages of neatly typed poems she had produced (from a distance so I couldn’t actually read their content).  The day had passed with no time spent on ipads or watching television, but instead time was spent exploring something new (and old) and interesting.  I think I might be onto something here.  There is the appeal of all things ‘retro’ of course but I think there is something else going on.  The extra effort to create a typed document seemed in itself to be satisfying.  And there is something significant in the nature of typing – that you have to live with your mistakes – you can’t just backspace them away.  They are there to remind you of your efforts; that you made mistakes, that is wasn’t perfect, and the imperfection is there to see.  It doesn’t have the same aesthetic appeal of Kintsugi – the Japanese method of repairing broken vessels with gold – but it reminds me of this.  That imperfection and the visible reminder of our mistakes can be accepted and even appreciated for what it represents – the effort that it took to get it right. 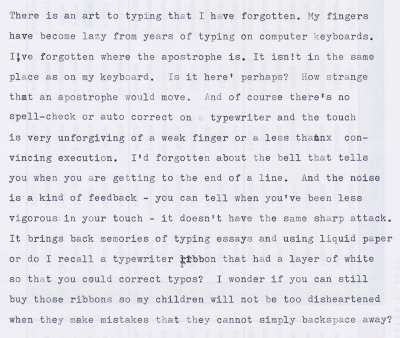 Posted by Christine McCombe at 12:37 PM No comments: