the things we keep 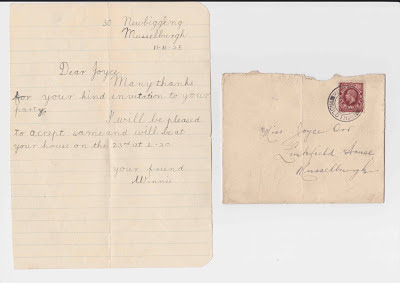 Today I went through some of my mothers papers that had been sitting in bags and boxes in our bedroom for well over a year.  My mother died nearly 18 months ago and I have been putting off this task, knowing that it would be difficult.  But today I went through the various bundles of photos, old and more recent, my mother’s nursing certificates and letters of reference, a collection of cheque book stubs with balances brought forward and all cheques accounted for. My mother was a very organised and orderly person.  There were the mother’s day cards I had made, the letters my father had written to her when she was on trips home to the UK.  And the letters from my Grandfather to her, all signed ‘love from Daddy’.  There was an old chocolate box full of cards to my parents congratulating them on my birth – quite an event as my mother was 40 when I was born and I was her only child.  I remember going through this box of cards on may occasions when I was a child, enjoying all the pictures of bears and baby girls and pink ribbons.  Many of these things made me cry, as I expected they would.  My mother is so present in all of these things – it makes her absence now all the more painful to me.

There were also many things that weren’t there that made me wonder why.  There were no letters from her mother, who died suddenly within a year or so of Mum moving to Australia.  I know they were very close so it seems strange that there are no letters from her, or indeed any letters before about 1977.  Although I haven’t been through all the boxes of Mum’s things yet, I don’t remember seeing any letters from her sisters in the UK, with whom she corresponded on a reasonably regular basis.  I have a feeling that my mother disposed of much of her correspondence.  I can imagine her having one of her ‘clean outs’ which could often be quite ruthless and unsentimental.  My mother was the opposite of a hoarder – she regularly shed things.  And seemingly letters were amongst the things that she did not deem worth keeping.  I’m not sure that they contained terrible family secrets that she didn’t want me to find out – I think she just felt no compulsion to hold onto the past.   I have found my mother’s lack of sentimentality in some instances quite disconcerting.  All through my childhood and into my adult life my mother held onto a neatly folded tissue containing my baby teeth.  I can remember where she kept it in her dressing table – it was always there.  After she died and I had to pack up her things, there was no sign of the baby teeth.  I can’t imagine why she would have disposed of them after all this time.  She never asked me if I wanted them.   Another example was an old reel – to reel tape recorder with a recording of me, aged 3, talking about a ‘koala bear’ eating porridge.  A few years ago I got the recording digitised as we were worried the tape might deteriorate.  I returned the tape to my mother and then some time after that she disposed of the tape machine and the tape reels.

So it was all the more strange going through her papers to come across a small envelope containing an RSVP to her 9th birthday party from a little girl called Winnie.  I’d never seen this note before, I have no idea who Winnie was, or why this small envelope and its contents has survived for nearly 80 years when so many other seemingly significant things have gone by the wayside.  Perhaps it had survived in my Grandfather’s papers (he definitely WAS a hoarder) and my mother came across it when she was going through his things after his death.  I will ask my aunty if she remembers a little girl called Winnie but as she would have only been 7 years old at the time, she may not .

And going through my mothers things leads me to reflect on how I deal with the dilemma of what to keep and what to shed as I move through life, accumulating things.  We have boxes full of children’s art works and school books and little things they have made – and our girls are still young.  There are years ahead of accumulating and shedding of things not regarded as important enough to keep.
I still have a collection of my own school books and art – a collection that has been pruned over the years but much of it survives.  I wonder how I will deal with the hard choices of what to keep and what to discard and what I will leave for our children.
Posted by Christine McCombe at 9:51 PM 1 comment: