A particular kind of aloneness

My six year old daughter was singing in the kitchen today and I told her what a good singer she was.  She asked “Did you sing as well as me when you were six?” And the answer is, I don’t know, and I no longer have anyone to ask.

I’m not sure whether you can really refer to yourself as becoming an ‘orphan’ once you are a grown up.   I’m very grown up, almost middle-aged by some people’s reckoning, but I still feel the particular impact of knowing that both my parents are now dead.  Although I have a half brother and sister from my father’s first marriage, they are a generation older than me and I did not live with them when I was growing up – I grew up as an only child.  And that is what makes me feel this newly conferred ‘orphanhood’ more acutely.  In a way I feel as though I have been severed from my childhood.  If I can’t remember something that happened when I was four, now there is no one else who can.  I relied on my mother’s recollections of my childhood, particularly for the years before about the age of 4.  Now that she is gone there is no longer a reliable witness to my childhood.  I know this comes to all of us but I think having young children makes me feel this absence more keenly.  What was I like at 4?  Is my 4 year-old similar or different to me at the same age?  If my 6 year old pulls a certain face, there is no longer any one to say - “you look just like your mother when she was your age”.  I’m not going to wallow in self-pity about my ‘orphanhood’ because in the scheme of things it is really not so significant. We all lose our parents eventually - some of us sooner than others.  At least I had one parent who lived to see me a happy adult and mother of my own children. But still, I think this particular type of aloneness will take a bit of getting used to.
Posted by Christine McCombe at 6:25 PM No comments: 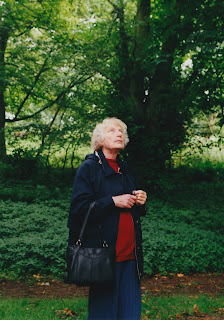 Today would have been my mother’s 85th birthday.   This time last year I had no thought that she would not be around for her next birthday.  I just assumed that there would be at least another couple of birthdays, although I’m not sure my mother was so convinced.

After some one much loved dies, I think it is the ticking over of that first year and the passing of ‘special’ days that can be most difficult to bear:  the first Christmas without them, the first New Year, the day of their birth and the day of their death.  I managed to cope quite well with Christmas and New Year: I steeled myself and held it together.  But over the last week or so I have been feeling an increasing sense of dread, the welling up of grief and a dissolving of my carefully maintained composure.
The last two nights I have gone to bed and cried, missing my mother, wishing that she could have been around for a couple more years, wondering if there was anything we could have done to hold on to her for a bit longer.  All of these things are of course part of any grieving but it was her birthday that was my undoing.  Last night I tormented myself thinking about her last birthday and whether she had any inkling that it would be her last.  I went back and read my diary for this time last year and was relieved to recall that we were all there for her birthday – that she had her two cherished grand-daughters pottering around her house for a couple of days; I’m pretty sure we got a cake to celebrate.  So it wasn’t such a bad last birthday.  There was some consolation in that at least.  But I still miss my mother and although 84 and a half years was a pretty good run, I still feel the loss and the unfairness of losing someone who still had a bit of living left to do.
Posted by Christine McCombe at 9:28 PM No comments:

What was it all about?

I thought it was about time I revisited why I started this blog and what it was supposed to be about.  “A blog about creating things and the spaces between creating things”.  And herein lies the reason why my posts have been so few and far between.  I’m not creating things and the spaces in between seem to be jam packed with other, not so interesting, stuff.  I’m not finding those moments for reflection and refocusing and recharging.  What I AM finding is full-on child-focused summer holiday blur, following on from hellish year of great sadness and stress and business.  There was a brief period of energized activity between busy hell year and school holidays when I got the garage door replaced, a new skylight and attic put in and the garden brought under some semblance of control.  I could perhaps have spent that energy and time on starting a new piece or doing yoga but I chose to try and bring some outward signs of order to our physical space.  The garage door was so that we could put a CAR in the garage – what an amazing concept – instead of all the junk that we have been ‘storing’ in there. And that necessitated a bit of a purge of no longer used things thanks to our local freecyle group. The attic was because we were rapidly running out of storage space, particularly after taking possession of many of my mother’s things – furniture, papers, photos etc.  The skylight was to brighten a gloomy kitchen.  So all of these things have actually helped make me feel a bit better about the space I am in.  I am feeling less swamped and oppressed by stuff.  I feel slightly more in control.  And that is important to me. I find it hard to work in chaos, surrounded by boxes and no longer used things.  So although I really don’t have very much to report in the way of ‘creating’ things or inspiration in the spaces between, at least I am in a slightly better place than I was before.  So, as I get closer to the end of summer holiday craziness, approaching the start of what looks like a dog’s breakfast of a year, I shall take a deep breath and brace myself. And I will keep trying to find those spaces, between and otherwise, where I can do the things that I really need to do.
Posted by Christine McCombe at 10:32 PM No comments: