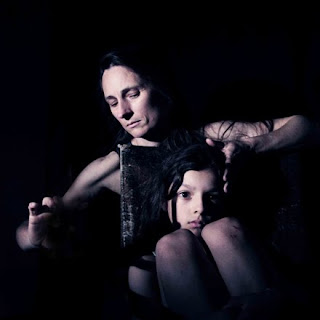 I have just been to a live recording of a chamber opera / music theatre work by Australian composer Helen Gifford.  The work, Exile , (after Euripides' Iphegenia in Tauris) was composed in 1985 and has never been performed.  This beautiful work has sat on a shelf for 25 years, unheard except by the composer, until David Young of Chamber Made Opera (and until recently artistic director of Aphids) 're-discovered' the work and got the project rolling.  Exile has been recorded as part of an ambitious co-production between Chamber Made Opera, Aphids and Speak Percussion to create what may be the world's first iPad opera in conjunction with new media artists Champagne Valentine (Amsterdam).

There are several reasons why all of this is worth writing about.
Exile is a beautiful and powerful piece of music. The performance featured soprano Deborah Kayser, a phenomenal performer whose voice defies description.  The work was performed un-staged, un-costumed, in a very un-atmospheric auditorium but Kayser's performance transcended all of this.  Watching her perform was like being given glimpses of another reality, almost a sensation of something else being lived and experienced behind a curtain - not visible but none the less palpable.  The music itself was restrained and subtle and intense. As a listener I was completely transfixed.
And this work that lay unheard for 25 years is about to be transformed into something entirely new, a second incarnation - an "interactive music-video iPad application" - not something Helen would have envisaged when she wrote the piece in 1985.  I find it incredibly heartening that a composer in her 75th year can hear a premier of a work composed decades earlier and then see / hear the work take on a previously unimagined second life.  As a composer it is easy to become disillusioned when works don't get performed and sit on a shelf un-realised - this is actually quite common. The process of presenting a work in a public performance can be very involved, complex and often costly, particularly when larger groups of musicians are required. After 25 years I think I might have given up on ever hearing this piece.  How wonderful then that others, several generations younger, have had the commitment and energy to bring this beautiful work to life and to an audience.
Posted by Christine McCombe at 11:15 PM 1 comment:

A love of dots

I receive a flat parcel in the post, from Germany.  It is a score of a Trio for clarinet, violin and piano by Galina Ustvolskaya.  I leave it on a chair and then get distracted by the day, taking children to crèche, doing housework, paying bills, cooking dinner.  The next day I find a window of time to myself, open the parcel, look at the lovely white newness of the score, find the recording on my ipod, put on my headphones and settle into a chair to read.  This is one of my great loves.  One of my other great loves, a two year old, is asleep on the couch next to me.  She stays asleep long enough for me to read the piece through but not long enough to write about it.  That will keep.

I wanted to write something about the joy of score reading.  It is a difficult thing to describe to the uninitiated.  I read the black spots on lines that another composer at another time has arranged in a particular way to represent the sounds that they hear and want others to hear.  Could I describe it as like reading an x-ray of a poem, if such a thing existed?  The black marks on the page are such an abstraction, a visual shorthand so far removed from the music that they represent but somehow reading a score takes me somewhere quite strange and profound.  I can read the dots and lines that someone else has made and I can almost imagine their thoughts as they write; how they imagine each of these sounds, the shape, the colour, the taste.  I can imagine my own hand holding that pencil as it hovers over the page, as I try to grasp that fleeting shadow of imagined sound and pin it to the page before it disappears.  I listen to the music as I follow the score and the experience of listening becomes something quite different – an experience of being inside the piece of music.  Not just of being inside a sound but of having an insight into the idea, the intangible inexpressible thing around which the piece of music has grown and given voice to.  Words are beautiful and I love the written word.  But these strange circles and lines and curves and dots, and the sounds that they attempt to capture, have a more powerful hold over my imagination.  And remind me of why I write music, and that I will keep writing music, even if no one else hears it. 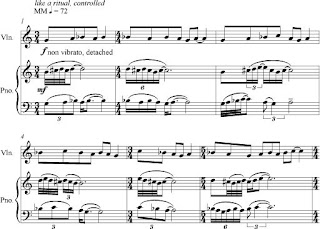 (a little bit from my new piece)
Posted by Christine McCombe at 11:12 PM 11 comments: